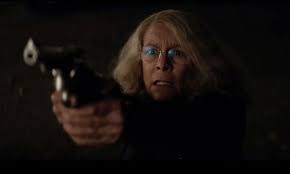 I saw Halloween last night. I am not a movie reviewer, but thought it might be fun and, hey, I have opinions.

To be fair, I am not a fan of horror/slasher flicks and never have been. I’ve never seen a single film in the Halloween franchise (nor Friday the 13th) even though they were at the height of popularity in the early 80’s when I totally fit the demographic for those types of movies. I’ll admit I was curious about this slasher film because I like Jamie Lee Curtis and it looked like she was gonna kick some ass. I am a fan of the “chicks kicking ass” genre. Even so, I probably wouldn’t have gone to see it, but I was invited by a group of ladies I enjoy, and it’s half off popcorn on Tuesdays so, why not.

This review contains tiny spoilers, but if you can’t figure these out beforehand, you’re not thinking…which is okay. Sometimes I do that on purpose, too, so that I can pretend to be surprised with totally predictable formula. But also, much of this was in the trailer – and the trailer is quite a bit better than the movie. That trailer was filled with potential about what that movie could have been. 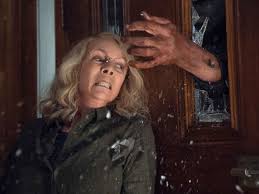 Maybe if the movie hadn’t held itself so accountable to the slasher film tropes it would have actually been good. Come on, Jamie! I’m sorry, but weak sauce, Lady! So disappointing. This is the best you’ve got? You’re gonna stand with your back up against the door when you KNOW he’s right outside, so he can break through the door and grab you? You’re gonna leave a room full of stupid mannequins for him to hide behind? Or wait, no, I see. That’s right. We needed those to “build suspense” and make it “scary” – because they are WHITE mannequins, just like his creepy ass white face. Also, you’re going to trap yourself in each room, turn by turn, THEN cordon the rooms off with these amazing traps you built. Why the F not just run up and trap off all the rooms, then blast his ass between the bars you so ingeniously installed?

And that spiffy hidden cellar. LOVE THAT SHIT. Brilliant and I would very much like one of these. But, why, oh why, would you keep leaving the remote that opens it right next to it? Also, the dude can withstand being hit at 30 mph by a truck, shot at, and falling from buildings…and you really thought a little old plywood and tile island was going to keep him out.

This movie didn’t do anything to redeem slasher flicks for me, despite my hopes. I don’t like watching people get killed in ever more gory ways, especially people who don’t deserve it. (I won’t deny that a “bad guy” getting killed is not as difficult to stomach). But my problem with these films, really, is they overt misogyny. It’s not even veiled misogyny. The women are killed with particular glee and relish. They are hunted like prey, tormented, and typically we are treated to more detail with their deaths. The men tend to get killed swiftly and with less attention to detail. Yes, to be sure, dudes get killed too, but usually only because they are in the way, not because they’ve been hunted. Quick and easy (though not less gory) death for the guys, and often, we just see the guy after he’s been stabbed. Presumably it’s not as fun to watch a man get murdered by a homicidal maniac. It’s only fun to see his head roll by.

I wanted Jamie Lee to go after Meyer’s ass, hunt him down, lure him in, trap him, beat him at his own game. They didn’t use her nearly enough. Instead she spent a lot of it waiting, powerless in her own “trap” as she ends up being at his mercy. The ending was supposed to be satisfying, as Jamie Lee, her daughter and granddaughter finally get him. That was supposed to be the “girl power” moment. I wanted to be on the edge of my seat, cheering, punching the air and gritting my teeth as they use their wit and power of solidarity to beat that bastard! But, they kind of just got lucky. Yeah, she had a “plan”… sort of. But again, meh.

For my money, I found the ending of The Quiet Place much more satisfying. Now, there’s a lady who is completely out of fucks. She is tired of it and not taking any more shit. She is going to defend her family with everything she’s got. She lures that monster in and kicks his alien ass. 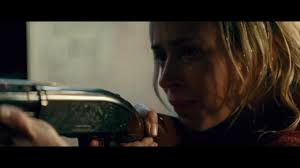